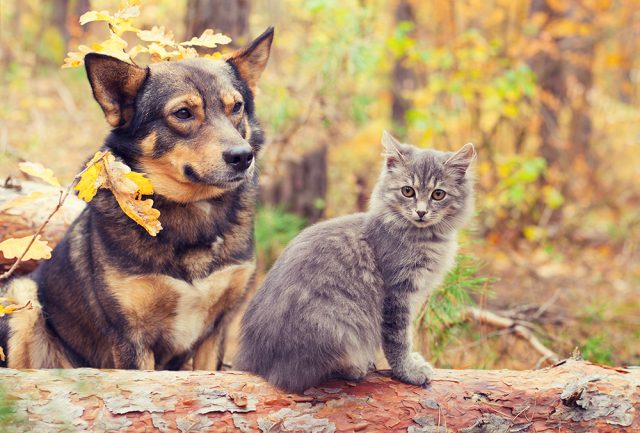 An allergy is an exaggerated and adverse reaction by the body’s immune system to external substances. As soon as the immune system encounters anything that it deems as foreign to the body, it responds by creating antibodies and immune cells. When the same substance is encountered again, the body decides whether to react and how. This is where things go wrong in allergy patients. Instead of reacting slightly or not at all, there is a severe reaction.

What happens in these cases?
On repeated contact with an allergen (a foreign substance), the immune system reacts as follows: it produces substances that lead to an inflammatory reaction of the skin (and sometimes the mucous membranes as well) and initiate itching.

The most common type of allergy in pets is atopic dermatitis: a hypersensitive reaction to airborne allergens, such as pollen and mites.

Other types that pets may suffer from are:
Flea allergy caused by contact with flea saliva; Food allergy where certain food components function as an allergen; contact allergy where the reaction is caused by antigens that come into contact with the skin (carpeting, blankets, shampoo and the like).

Because the symptoms associated with the various allergies may look very similar, it is important that a proper clinical examination is carried out to find the exact cause of the allergy.

Atopy
Atopy is one of the most important forms of allergy in pets. Between 3% and 15% of pets suffer from an atopic condition¹. Atopy is hereditary and it can lead to allergies against the pollen of some plants (e.g. grasses, weeds, and trees), fungi or various dust and storage mites. Certain breeds appear to be at higher than average risk of developing atopy. Such breeds include the Lhasa Apso, Schnauzer, Alsatian, Boxer, Labrador, Golden Retriever, Poodle, West Highland White Terrier, Cairn Terrier, Jack Russell, and Fox Terrier².

The symptoms of an atopic individual usually manifest themselves before the age of 3 years. The initial symptoms are often mild and are tolerated by pet parents because they respond well to short-term symptomatic therapy or because they initially only appear at certain times of the year such as pollen allergies in the summer.

When diagnosing atopy, a systematic work-up (clinical history, clinical examination, treatments etc.) and accurate reporting during the entire process are of vital importance.

The following items are key points in the clinical history:
-Age at which symptoms first developed; In 75% of all atopy patients, the first signs appear before the age of 3. Sporadically, symptoms occur in animals under 6 months of age. The first symptoms have often escaped the owner’s attention, or a quick response occurred after administering symptomatic medication. In other cases, the animal recovered spontaneously after the season or the environmental factors have changed.

Clinical symptoms of atopy
The most obvious sign of an atopic condition is itching. Commonly, dogs will lick or bite their feet and can be seen rubbing their heads along the floor or other objects. This can cause skin inflammation. Occasionally, allergic animals will develop watery eyes or sneeze.

Chronic inflammation of the skin on paws, head, armpit or groin associated with the itching is the most important criteria for making the diagnosis. The skin inflammation can be exacerbated by bacterial (Staphylococcus) or yeast (Malassezia) infections.

Elimination of allergens
The elimination of allergens aims to completely avoid contact with the allergens. This method is the fastest way to get results, but is often not an option; this is certainly the case if there is hypersensitivity for multiple antigens or in the case of hypersensitivity to grass, tree pollen or house dust mite which are very difficult if not impossible to avoid, for example.

Symptomatic Treatment
The group of drugs that are used to treat only the symptoms of the allergy is called symptomatic medications. Examples of this type of medications are antihistamines and corticosteroids.

Duration of effectiveness
Drugs to treat the inflammation, such as corticosteroids (prednisolone) and cyclosporine, are excellent at suppressing the allergic reaction. However, these medicines do have significant disadvantages, especially when they have to be given as long-term therapy over an animal’s lifetime as is the case with allergies. For that reason, it is advisable only to administer these medications for short periods.

Corticosteroids and antihistamines
Anti-histamines are not very effective in dogs: 10-15% effectiveness.

Symptomatic therapies can be useful for the following categories of patients:

-Season-related atopy during only a few months every year.
-Atopy suspected pets, but in which the causal allergens cannot be identified (also known as atopic-like dermatitis)

Immunotherapy
Allergen specific immunotherapy tries to make the patient less sensitive or not sensitive at all to the substance to which it is allergic by injecting the animal with the allergens in increasingly larger doses and at increasingly longer intervals.

Patients that have symptoms for more than 3 months can be considered for allergen-specific immunotherapy. As a pet parent, you need to be aware of the fact that this is a lifelong treatment in which your pet is never completely cured, but rather the disorder is kept under control.

Results
The proportion of dogs that respond well to the treatment is about 75%¹. Be aware it will take some time for the treatment to have any noticeable results.

Read more
Find a Spectrum Veterinarian
We use cookies to ensure that we give you the best experience on our website. If you continue to use this site we will assume that you are happy with it.Ok