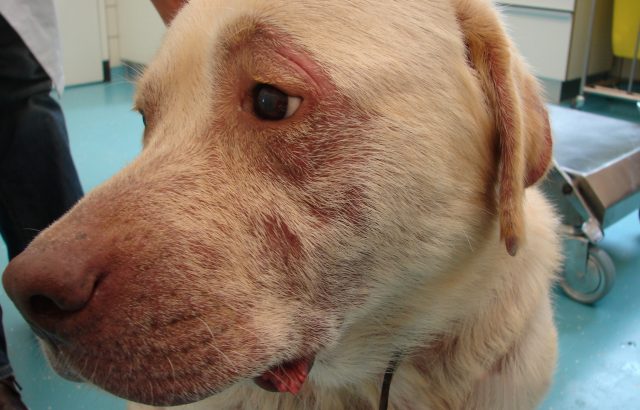 The most common type of allergy in pets is atopic dermatitis: a type I or direct-type hypersensitive reaction to inhalation allergens, such as pollen and mites.

A flea allergy is a mixed allergy, a combination of direct-type I and delayed-type IV hypersensitivity, caused by contact with flea saliva. Food allergy where certain food components function as an allergen; contact allergy where the reaction is caused by antigens that come into contact with the skin (carpeting, blankets, shampoo, etc.).

The clinical signs of different allergies mentioned above can look similar. However, the treatment of each of these allergies is quite different; this is why the correct diagnosis is important before starting the treatment.

Atopy is one of the most common types of allergy in dogs. A study conducted in 2001 estimated between 3% and 15% of dogs suffer from an atopic condition,¹ but more recent data collected by Nationwide shows that percentage could be much higher.  Atopy is hereditary and it can lead to allergies against the pollen of some plants (e.g. grasses, weeds, trees), fungi or various dust and storage mites. Certain breeds appear to be at higher than average risk of developing atopy. Such breeds include the Lhasa Apso, Schnauzer, Alsatian, Boxer, Labrador, Golden Retriever, Poodle, West Highland White Terrier, Cairn Terrier, Jack Russell, and Fox Terrier².

The symptoms of an atopic individual usually manifest themselves before the age of 3 years. The initial symptoms are often mild and are tolerated by pet parents because they respond well to short-term symptomatic therapy or because they initially only appear at certain times of the year such as pollen allergies in the summer.

Clinical symptoms of atopy
Pruritus without visible skin disorders is the most significant symptom in pets. This manifests itself in frequent licking or biting of the paws and the rubbing of the head along the floor or other objects. Despite the frequent itching visible clinical symptoms to the head or extremities are observed in 60-70% of the patients. Recurrent ear infections can also be caused by an atopy (in over 75% of the cases¹).

Sneezing, a discoloration of the fur (from licking) and/or bilateral eye infection are also observed in some patients.
Depending on the duration and the severity of the disorder, the lesions can vary between erythema (redness) to hyperkeratosis (keratinization) and/or lichenification (thickening) of the skin. In addition, other parts of the skin may also show clinical symptoms.

Secondary symptoms
Atopy is often accompanied by seborrhoea sicca (a dry form of excess sebaceous excudate) mixed with skin flakes and superficial pyoderma (skin inflammation) due to bacterial (Staphylococcus aureus or intermedius) or yeast (Malassezia) infection. When patients are being treated for an atopic dermatitis, they should also be treated for secondary symptoms (e.g. seborrhoea and/or pyoderma).

It is extremely important in the diagnostics of atopic dermatitis to have a systematically prepared clinical history, as well as to adequately record all of the information obtained during the entire process of the examination.

The following aspects are important in the clinical history:
-Age at which symptoms first developed: the first symptoms occur as early as between the age 1-3 years in 75% of the atopic patients sporadically, symptoms occur in animals under 6 months of age. The initial symptoms are often ignored by the owner because of a quick response on following medication, a spontaneous recovery with the changing of the seasons or a change in the environmental factors.

The anamnesis should also include questions regarding the sleeping place (floor covering, pillows, blankets etcetera, in connection with contact dermatitis), the food (food allergy), the presence of other animals (atopy based on animal epithelium) and the vegetation in and around the house. The effect of previously imposed treatments may also produce valuable information.

Additional diagnostic tests
Skin scrapings microscopic tests, fungal and bacterial cultures must be conducted in order to exclude any ecto-parasitic and infectious causes of skin problems.

An elimination diet (hypo-allergenic diet, possibly followed by a provocation (challenge) diet, can provide information regarding the likeliness of a food allergy.

After having diagnosed atopic dermatitis there are several treatment options to be considered.

Elimination of allergens
The elimination of allergens aims to completely avoid contact with the allergens. This method is the fastest way to get results, but is often not an option; this is certainly the case if there is hypersensitivity for multiple antigens or in the case of hypersensitivity to grass, tree pollen or house dust mite which are very difficult if not impossible to avoid, for example.

Symptomatic treatment
Symptomatic medication relieves the allergic symptoms from which the patient is suffering fairly quickly, but only for a limited period of time. Unfortunately, most symptomatic drugs have disadvantages, particularly if they – as is the case in atopy – have to be administered for life.

Corticosteroids, cyclosporines or antihistamines
Antihistamines are only slightly effective in dogs (10-15% effectiveness).

Treatment with corticosteroids and cyclosporine is highly suitable to suppress the allergy, however, due to their side effects, they should not be administered for long periods of time.

Symptomatic therapies can be useful for the following categories of patients:
-Season-related atopy during only a few months every year
-Seasonal atopy during some months of the year;
-Animals of which one suspects the presence of atopy, but in which the causal allergens cannot be identified (intrinsic atopic dermatitis).

Patients that have symptoms for more than 3 months can be considered for allergen-specific immunotherapy. The owner should be made aware that this is a lifelong treatment that does not cure the condition completely but rather keeps it under control.

Results
The results of allergen-specific immunotherapy: a significant improvement (>50%) of the clinical signs occurs in the course of time in 75% of the treated animals; it is assumed in this respect that any pyodermatitis (skin infection) and/or seborrhea (dry form of excessive secretion of sebum mixed with flakes of the skin) is treated simultaneously¹.